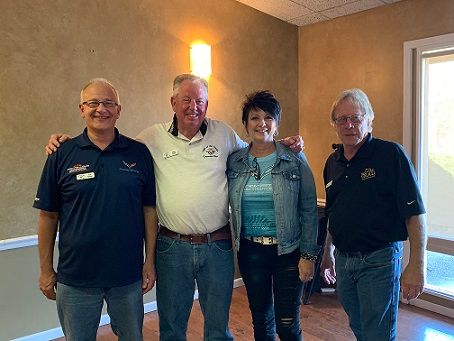 The start of a new decade marks an auspicious occasion for one of the largest Corvette Clubs in the Midwest - the Lake of the Ozarks Corvette Club (LOCC). Twenty years ago, on January 10th, local residents Parker and Marybelle Darr, along with the late Larry Lembach. held the first meeting of the club with two Corvettes in attendance as initial founding members. Since that day, club membership has grown to almost 200 members, coming from Missouri, Iowa, Kansas and Illinois. Members meet monthly and frequent local restaurants with 60-70 members in attendance. The luncheons are spread around to support the local business community who  thoroughly enjoy the presence of 30-35  gorgeous Corvettes in their parking lots - especially in the off-season.

What started out as a small hobbyist club centered around enjoying America’s only true sports car, has grown to embracing the activities and pride of the local community. LOCC was one of the original sponsors of the Hot Summer Nights program as well as playing continuing significant roles in the Annual St. Patrick’s Day and Christmas parades. Local kids who are unable to participate in traditional Halloween “Trick or Treating” are treated to a parade of 25-30 stunning Corvette riders happily distributing hundreds of pounds of candy to all who line the streets for the parades. Local Dentists also reportedly love the tradition! The club has also proudly carried many of the Lake’s lovely Homecoming Queens and other royalty in school and festival parades.

LOCC participates and generously supports numerous other area Corvette clubs who sponsor Car Shows with registration monies that support local charities in places like Jefferson City, Columbia, Branson, Osage Beach, Hannibal, and Camdenton, as well as the Fall Follies in Versailles. Club members also travel as a club to Hot Springs and Eureka Springs in Arkansas as well as visits to New Orleans. In 2019 members made their initial trip to Enid Oklahoma Corvette show. For LOCC members, few things are as rewarding as traveling in a caravan of 20-25 gleaming Corvettes on America’s scenic highways and byways - seeing the USA in their Chevrolets!

LOCC Club community awareness includes the club sponsoring four annual scholarships to local students who are going on to advanced training and education in the automobile field. Scholarships are awarded to students at the Lake Career & Technical Center and the Eldon Career Center. Since the program was instituted in 2009, LOCC has proudly awarded over $18,000 in scholarship money to local students. The club has a new Executive Board for 2020 led by President Pete Spanos whose enthusiastic spirit will serve the club well in the coming year as LOCC moves forward, in conjunction with Margaritaville Resort, in sponsoring its first ever LOCC Corvette Show in April of 2021. Watch for it!

But it comes down to the primary reason all of this happens - The Corvette itself. It has been the Chevrolet flagship since 1953, and with the imminent release of the 2020 mid-engine Stingray, the eighth-generation Corvette, it is clear that this American icon is not going anywhere except down the road..........and very, very quickly!

The Lake of the Ozarks Corvette Club (LOCC) had its beginnings in late 1999 when Mary and Parker Darr (Co-founders) and Larry Lembach (Co-founder) decided to start a Corvette Club in the Lake of the Ozarks area (see photo 1). Although they did not have contact with any other Corvette owners at the time, they researched the topic and decided to start an advertising campaign utilizing television and newspaper ads, fliers, and word of mouth to promote a possible club. On January 10, 2000, they started a club with 2 Corvettes, one a 1989 and one a 1999. Rudy Willingham, who was a local business owner, saw the ad and came up with a list of potential members. Contacts were made from that list and from response to the ads on television and newspapers. The club had its first meeting at the Arrowhead Lodge in the “Wood Room” on April 9, 2000. To their delight, a total of 13 people showed up and the following individuals joined Parker, Mary, and Larry to become Charter Members: Betty and Bob Goble, Kerry and Benita Shannon, Marty and Peg Klaus, Eddie and Linda Smother, and Rudy Willingham. During the last decade, the club has grown to its present membership of 195 people.

The club is essentially a hobbyist club. As the club has grown over the years the challenge has been to stay true to its original purpose and goal of enjoying the camaraderie of other Corvette owners, to drive our cars and enjoy them on the road. We have a membership which is focused on staying true to these goals and our intent is to continue that tradition. The club actively attends and participates in community events such as the annual St. Patrick’s Day Parade, the annual Christmas Parade held in Lake Ozark, and the Fall Follies held in Laurie, MO. Numerous members of the club attend a number of other car shows and events in the surrounding region as well. Scholarships are rewarded annually to several students from local Technology schools that are going on to advanced training and education in the automotive field